BATS & The Millennium Link (BaTML) was launched in late 2000 with a view to monitoring the bat populations along and adjacent to the Forth & Clyde and Union Canal network that connects the east coast of Scotland with the west coast. The project concluded in 2007. At the time, these canals, after heavy investment, were in the process of undergoing major changes during a period when they had been completely re-opened to water traffic. From an environmental point of view these changes were by no means all negative. Many positive things are happening which we are sure will benefit the local wildlife and bats in particular. As such our canals should continue to remain very valuable wildlife corridors. The project was set up primarily to study the following species of bat: Myotis daubentonii (Daubenton’s Bat); Pipistrellus pygmaeus (Soprano pipistrelle); Pipistrellus pipistrellus (Common pipistrelle) 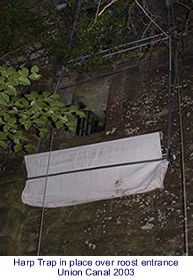 To help us in achieving these objectives we also got involved with Habitat Assessment, Insect Studies, Training, Public Walks/Talks and wider Public Relations activity. Note that BaTML was a non-profit making organisation and the money generated through our activities was used directly for the benefit of our research and/or bat conservation generally.

Funders and Supporters
All of our results were achieved in conjunction with a network of enthusiastic volunteers without whom we would have struggled to come anywhere close to our goals. We would like to thank everyone involved for their support. We are greatly appreciative of the funding obtained from British Waterways, Falkirk Environment Trust and Scottish Natural Heritage. Without this we would not have been able to do anything meaningful. In addition to our funders we are also keen to acknowledge the support/encouragement given to us by the following organisations:

BaTML Publications
BaTML Publications was the annual journal produced by the BATS & The Millennium Link (BaTML) project. The core objective behind this journal was to make available, within the public domain, as much detail as possible of the work carried out by or in association with BaTML. In addition to this, however, we were happy to consider including material from other people or organisations relating to bat studies and in particular the areas of study we are involved with.

^o^ Bat Surveyor Induction & Survey Methods 'Lunch-Bite' webinar (Tues 13.04.21). Aimed at seasonals/new ecologists. Here we'll share a wealth of experience & get you (or your new team) set up for the season ahead. Booking details below ^o^ \o/www.eventbrite.co.uk/e/seasonal-bat-surveyor-induction-survey-methods-overview-tickets-1479730483... ... See MoreSee Less

We are a Corporate Member of the Bat Conservation Trust